Just when we thought we were finally done with “unicorn food” fever, here comes another colourful, sparkly trend: fairy floss!

Also known as candy floss or cotton candy, in other parts of the world, it's been used to jazz up milkshakes and cakes or as an alternative to raw sugar. But did you know there’s more to fairy floss than just as a decoration to your favourite dessert Here in Australia it has become a nationwide food craze (and the coolest trend sweeping Instagram) because of its many uses.

We’re pretty sure you’ve already heard about cotton candy s’mores and the popular fairy floss ice cream that arrived in Australia in December 2015. Fast forward to 2018 hand we've been introduced to a few more new sweet treats made with this fluffy, sugary delight.

And it's not hard to see why. This popular dessert boasts fairy floss topped with popping candy, freeze-dried raspberries, and flowers but once you pour a cup of coconut milk over it, the fairy floss disintegrates to reveal a honeycomb gelato-filled Sicilian brioche bun with jellies, fruits, and a delectable white chocolate matcha sauce! 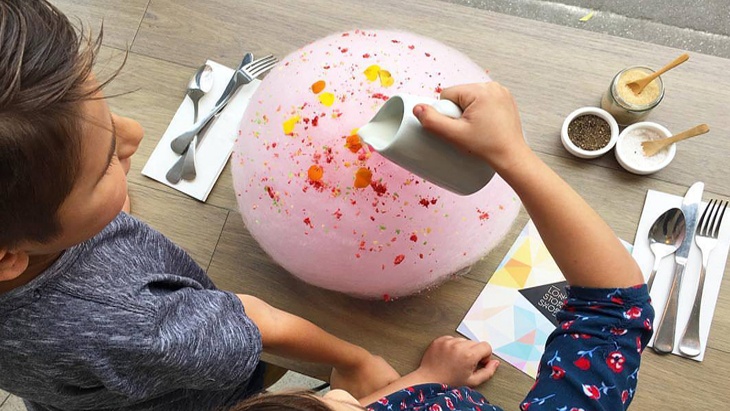 The Fairy Floss Burrito is a yummy, colourful ice cream wrapped up in cotton candy. The wild invention of a dessert shop called “Sugar Sugar” in Sarnia, Ontario the craze has now firmly planted itself on our shores. 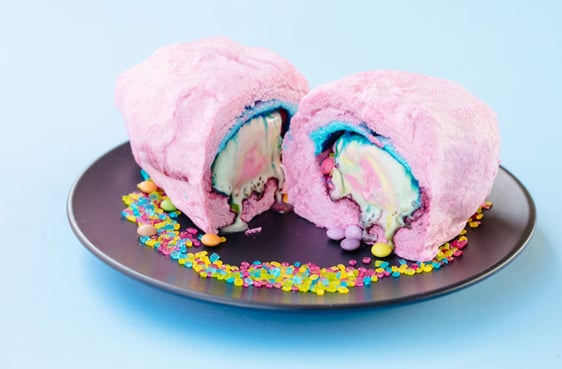 Surprisingly, fairy floss isn’t just for desserts alone. Several local bars are also using it to jazz up their cocktails. Ever heard of the Cotton Candy Martini? It’s a cocktail topped with your favourite flavour of fairy floss. Similarly with The Bliss, a delicious cocktail decorated with house-spun fairy floss, available at the The Thirsty Wolf bar in Sydney.

The Om Nom Kitchen at the Adelphi Hotel in Melbourne also has a fairy floss cocktail as part of its signature menu. Called  ‘Sex on St Kilda Beach 28’, it's the star attraction of the bar's ENGAGE YOUR SENSES range. Made with fresh fairy floss, peach liqueur, rum, chambord caviar, and rose foam it's definitely one for the bucket list.

Who says breakfast can’t be magical? In Perth, there are already several cafes offering the prettiest fairy floss breakfasts. One of them is Cafe 2 Twenty Four. This Belmont-based cafe is serving delicious coffee with blue and pink fairy floss perched on top. 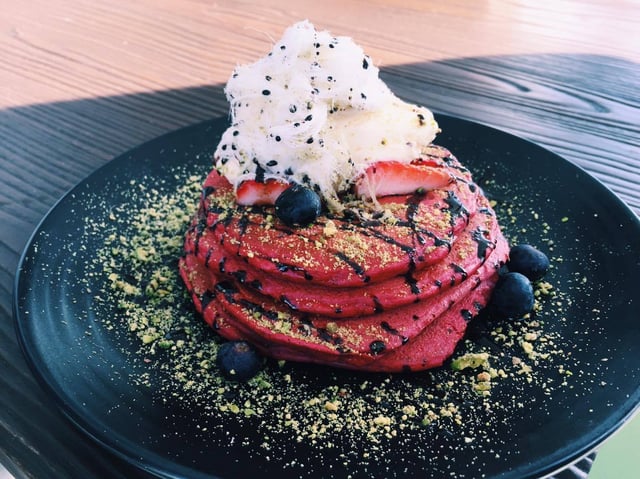 So it would seem that the food and beverage industry isn't quite done with the ‘unicorn food’ craze just yet. In 2018, pastel-coloured dishes that look almost too magical to eat will still be THE thing. So why not hop onto the fairy floss bandwagon and see how you can add this sweet candy of threaded sugar in to your range.

More Food Trends 101 entries when you head over our blog!

Five Signs Your Business Could be in Financial Trouble

Expenses You Can Reduce For Better Cash Flow